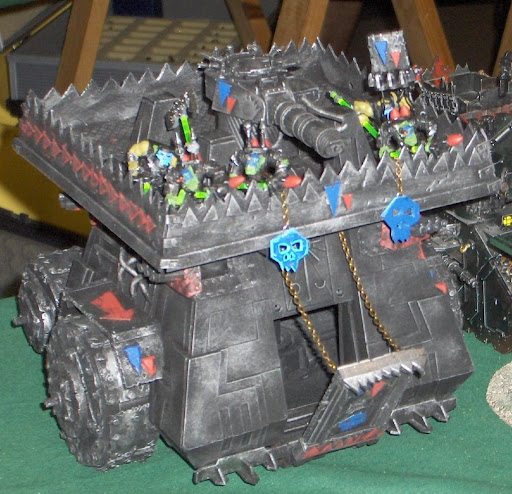 With the new edition barely a week old and NoVa fast approaching, I've got my work cut out for me.  There's lots of playtesting, building and, ugh, painting.

Necrons got a lot of buffs in the new edition, my favorite probably being allies.  Allies of Convenience for Necrons include Grey Knights, Tau, Chaos Space Marines and Orks.  Looking in my closet I've got well over 3000 points of Orks lying around.  So the wheels begin turning and this is the result.

HQ (270)
Overlord - Warscythe, Sempiternal Weave, Mindshackle Scarabs (130)
Cheap HQ to unlock my Court and to present an incredibly efficient challenger.
Royal Court - 2 Harbingers of Destruction, 1 w/ Solar Pulse, 2 Harbingers of the Storm (140)
S8 AP2 is hard to pass up and, while less effective than before, Solar Pulses are still incredibly useful.  Voltaic Staffs are the new melta, even 1 will average 2 HP stripped.

Fortification (70)
Aegis Defense Line - Comms Relay
4+ cover for my Big Gunz, making them insanely durable, as well as re-roll to ensure all my flyers come on when needed.

Allied Orks
HQ (120)
Big Mek - Power Klaw, Kustom Force Field (120)
KFF gives cover to both big units, leaving no Ork out in the open to get focus fired.  With LO,S and Precision Strikes, the PK Mek is very, very useful.

Hope you managed to stay with me on this.

I find that Necrons have always had some difficulty when it comes to holding in place.  With no Fearless or Stubborn Troops and a pretty pathetic assault capability, parking on objectives near midfield is asking for trouble.  Dumping 60 Fearless bodies into midfield with guaranteed cover (no focus firing!) and an assload of dakka, Orks drop right into the list.  This frees up my brobots to focus on doing what they do best: zooming around with loads of shooting and making stuff disappear.

So we've got 7 Tesla Destructors, 3 Kannonz, loads of small arms firepower and 4 flyers.  Bodies and bullets (or lightning bolts) aplenty.

+++Overlord, Mindshackle Scarab Batch 3X24D has proven unsuccessful in application upon the Orkoids.  Their systems, while crude, are innately robust and are able to resist shortly after initial implantation.  Canoptek units are still restoring structural integrity to the lower levels of Tomb XZ54.  The new devices have yet to be overcome.  However, combat efficiency has only increased by 0.03%, though I propose this is due to the simplistic nature of the subjects.  I am sending the earliest subjects to the Stormlord as tribute, perhaps he will see fit to increase your standing when he witnesses a supposed lowly vassal tame the nuisance he believed uncontrollable.+++

Got any ideas you want to share? Need army list critique? Any confessions of undying love or seething hatred? Perhaps a wish to give me money and/or jewelry?

Contact me at:
blackjackandhookersftw@gmail.com
I'm also on Skype, Vassal and G-Chat as Chumbalaya

Blackjack & Hookers, because nobody else has 'em. Warhammer tactics, batreps, project logs, vidya, life, and way too much internets.