Crusade of Fire: Phase One 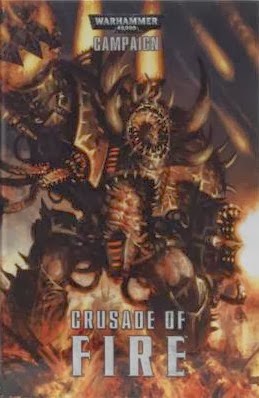 The Year of the Narrative is in full swing, folks.  Here's a report on the Crusade of Fire campaign we just finished up.  The campaign itself is pretty fun, but it's nothing more than what you and your pals could come up with, definitely not worth the $50.  Read my fanfic and cringe!

"After nearly a thousand years, the Warp Storms that have isolated the Corvus sub-sector from the rest of the Imperium have begun to abate.  Once a rich and prosperous sub-sector sitting at the nexus of military and economic power in the galactic region, who knows what changes a thousand years of isolation will have wreaked on the sector?  Chaos and ruin might reign, or some vestige of Imperial governance may yet remain, as might arcane technology thought lost to the Warp."

The tides of the Warp are fickle.  One day the storms engulf a huge swath of space, a thousand years later they vomit it back into reality.  The Corvus sub-sector had finally returned, and it brought something with it.  Centuries in the Empyrean had tainted the sub-sector, leaving not one planet free from the touch of Chaos.  Bustling Hive Cities reduced to charnel houses, gargantuan Manufactorii filled with smoke and wreckage, ancient Space Stations quietly rotting save for the echoes of the dead, such was the state of the Corvus sub-sector upon its reentry into real space.

Despite the desolation, Corvus was a strategic lynchpin in the Imperium's continued survival.  The Crusade of Light was quickly assembled to reclaim and purify the sub-sector.  At the tip of the spear were elements of the Ultramarines, Crimson Fists, Iron Hands and Space Wolves.  They launched early, taking the fight to the enemy and paving the way for the more ponderous elements of the Crusade.

The ruins of Corvus were not abandoned.  Chaos had taken root in every planet and awaited new blood to drink.  The capitol planet, Corvus Majoris, was once a teeming Hive World.  What emerged was a desiccated plague husk.  Typhus, the Herald of Nurgle himself, had spread his contagion to the entire planet and looked to claim the system in Nurgle's name.

The Death World Alfrost had survived the millennium with much intact.  However, as a barren, ice-covered rock, an Alfrost barely surviving was not much different from Alfrost at the height of Imperial control.  On this frozen wasteland, a band of Dark Eldar led by the Wet Knife Haemonculus coven set up their diabolical workshop in the remains of an Imperial command bunker.  A thousand years in the Immaterium was nothing to the torments meted out by the Haemonculi.

As the Warp spewed out the planets Corvus Majoris and Alfrost something else came along.  A massive conglomeration of interstellar flotsam, a Space Hulk, emerged in orbit of the Forge Wold Junkatta.  The Hulk was far from abandoned, for within minutes of arrival massive chunks of rock and metal launched towards Junkatta.  Junkatta's masters had long since abandoned the tenets of the Omnissiah, turning to the Dark Gods to keep the forges churning out demonic machines.  Mighty as their chaotic war engines were, they were swiftly overwhelmed and driven off by the Green Tide.  Big Mek Gubsnagga and his Dreadmob, "Da Urfshakaz" claimed Junkatta and its Mantufactorii to produce more and larger smoke-belching monstrosities.

Initial landings by the Crusade of Light were disastrous.  Erik Morkai of the Space Wolves, Master of Runes and overall commander, was ground to paste under the Deff Rolla of Gubsnagga's personal Battlewagon "Da Skwisha".  Varro Tigurious barely escaped a Dark Eldar ambush even his powers of foresight could not detect.  Iron Father S'mahs Erckuf, however, led his warriors to establish a beachhead on Corvus Majoris with the help of his Cadre of Ancients, half a dozen Ironclad Dreadnoughts.

Gubsnagga quickly went to work adding the remains of the Space Wolves to his infamous "pit uv gubbinz".  As he worked he was contacted by a vision of Typhus.  The Herald of Nurgle declare Corvus the dominion of Nurgle and any Imperials were to be surrendered for sacrifice.  He promised no harm to the Orks if they complied, provided they limit their ambition to Junkatta alone.

Gubsnagga set to constructing the first of many Stompaz, the personification of Orky belligerence.  Typhus consolidated his position, plotting his revenge on both the Imperials and Orks.  The Dark Eldar observed this in between their "experiments" and decided to let the brutes sort things out between themselves.  Imperial forces regrouped and prepared for the next offensive, attempting to take advantage of their divided foes.  Meanwhile, the Warp continued to churn and more planets began to emerge.
Posted by Chumbalaya at 2:54 PM

Labels: Crusade of Fire, Orks, Year of the Narrative

hey! it's great to see you back.

Amazing blog you have! Get best live casino experience with Online live casino malaysia. The most amazing things about this live casino gambling are it offers 100% sign up bonus as a welcome to its newly signed up users and with valuable bonus points with each deposit.


Please keep updating this blog, it's been too long. Great post! We adore this blog and This information is very good.
สมัคร Sbobet

No matter where you are We have developed systems all the time to support the increasingly popular technology and to meet the needs of the players.


thank you for the great information. You are awesome

Amazing information, Thanks for share this informative blog with us. Visit following page for Logistic, Shipping and Freight Forwarding.
Logistics Company in Delhi

Game of the year, playing the most fun online games We enjoy the 918kiss online slot game. Shoot fish online.Bacarrat online. Sic-bo online. Poker online . Thanks for the space That let us introduce the game to your blog Thanks again

Online slot games that are highly popular now. We come to introduce you to Slotciti. It's a game that is easy to play. Real money With a variety of games and international standards Making it highly secure and confident There are many games to choose from.

American Express credit card is one of the most popular and trustable financial authority banks in America. It has been around for more than 200 years and offered services worldwide.

The eBay codes at the website can by now going on you a lot in such matter. Many people now a day search for eBay codes.

I’ve just discovered your blog. Its really interesting and I’m sure I’ll be checking it out a lot in the next few weeks.
sagame

Thank You for such amazing information. This is one of the best sites which provide all the details of related topics.must visit

Thanks for your sharing, it helps me a lot and I think I'll watch your post more.
………………...
goldenslot
golden slot

Very helpful! Thanks so much! Now I get to categorize my posts.
ดูบอลสด
ผลบอลเมื่อคืน
ผลบอลสด

What an awesome post, I just read it from start to end. Learned something new after a long time
สล็อตjoker
slotjoker
สมัครGCLUB
ufabet
ยูฟ่าเบท
รูเล็ตออนไลน์
ท่างเข้าคาสิโน
รวมทางเข้าเอเย่น
ทางเข้าUFABET
สล็อตjoker

Thanks for a awesome blog.
bk8

They are responsive, You would fall in love with writing again after using it.
sagame66
sagame77
sagame88

Your article is very good. Is an article that provides knowledge for living quite well
slotxo

Thank you for the useful educational article
Sa gaming

Just read the article and I enjoyed read it. Thanks for sharing though.

Cool blog! Really loved reading this blog. Check some other hottest, top trending games on the internet at BK8

Gclub online casinos Game Center Online Baccarat In the form of live broadcast, straight from G Club Casino, Poipet, Cambodia Open a full range of casino games such as Baccarat, Insurance, Hi-Lo, Roulette, Tiger, Fantan and online slots. Can join in many fun ways Whether playing in G Club via the webpage Or to play mobile Gclub that supports both Android and iOS systems. We also have services G Club entrance The newest update provides 24-hour deposit and withdrawal services with a professional team. รอยัลออนไลน์Therefore, you can be assured of the speed and safety. Open a new fun experience with us today.

Mega888 provides honest reviews and opinions about Mega888 by professionals at BK8.

This topic is very useful i will try it.Thank you so much.บาคาร่า

LeoCity88 has gained prestige and has become the best online betting brand among all Playtech products in Malaysia. Most local casinos have a high level of trust in LeoCity88 Casino, which is mainly supported by its reliability, dependability, and reliability. Not to mention the fact that it is actually the leading casino game provider in the country.

Thanks for sharing useful information! Keep posting articles like this. https://www.918kisses.my/918kiss/how-do-i-login-to-918kiss/

Amazing blog you have! Get best live casino experience with Online live casino malaysia. The most amazing things about this live casino gambling are it offers 100% sign up bonus as a welcome to its newly signed up users and with valuable bonus points with each deposit.

It was during the pandemic COVID- 19, I was surfing on the internet and suddenly came across this blog. When I read this blog, I found it very helpful for online game players. For more information regarding this topic, Visit
SCR888downloader.

I and my brother are fond of playing online games and were looking to spend some time searching for new games on the web. Then we saw this blog and found it very useful. It provides various game platforms. If you want to know more about online games, then click here https://www.918kisses.my/online-casino-malaysia-2/

An amazing blog. I have been an avid admirer of these kinds of games but never thought that online format would be so amazing. Will definitely give it a try after having enough of this online casino in Malaysia. https://www.mega888downloader.com/online-casino-malaysia/

hey! it's great to see you back.

I love all the posts, I really enjoyed, I would like more information about this, because it is very useful and working.Thank you for this wonderful Article. Skindex

Got any ideas you want to share? Need army list critique? Any confessions of undying love or seething hatred? Perhaps a wish to give me money and/or jewelry?

Contact me at:
blackjackandhookersftw@gmail.com
I'm also on Skype, Vassal and G-Chat as Chumbalaya

Blackjack & Hookers, because nobody else has 'em. Warhammer tactics, batreps, project logs, vidya, life, and way too much internets.